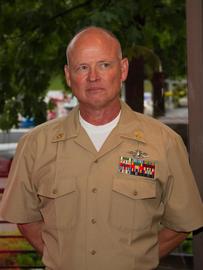 His combat qualifications/training requirements necessitated years of extensive training in combat operations, situational awareness and operational security in order to ensure the Chaplain’s physical safety in a combat environment. His primary mission responsibility as the Staff Noncommissioned Officer in charge of operational decisions was to conduct comprehensive risk assessments to determine viability of proposed forward missions.

Following his combat deployment to Al Anbar Province Iraq, Chief Oihus was by name selected to serve as a core member of the Returning Warrior Workshop (RWW) Program Development and Implementation Team (2006-2007). His distinctive experiences in the combat zone were the foundation for significant elements of the RWW event content. He was a facilitator and presenter at over fifty RWWs throughout the United States.

In January 2009 was again by name selected for a three year mobilized to Marine Corps Mobilization Command - Marine Corps Forces Reserve. His mission was to bring the highly successful Returning Warrior Workshop (RWW) reintegration program to Marine Corps Forces Reserve (MARFORRES). While serving at MARFORRES he fervently advocated for the distinctive engagement strategy of the RWW as the most effectual means of addressing the unique challenges faced by the IRR/Reserve Combat Marine population.

Chief Oihus has been married to his wife Michele for 22 years. They have three sons and one daughter. In the civilian world he works for the Arizona Department of Administration as the Agency Liaison for ADOA Travel Reduction Programs. In that capacity he consults with upper management within all other state agencies, boards and commissions in regards to air quality and commuter travel reduction issues.

"When it comes to programs, Chief  (goes back to Africa 2013) is my right hand man.  He has been doing professional Warfighter Reintegration for a number of years.  He gets it.  He lives it.  Soon we will have him onboard full-time."
- Doc V, Executive Director