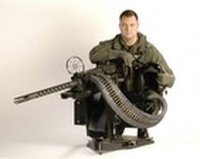 Prior to joining StraCon, Dan completed a 22-year career in the US Marine Corps, retiring as a Gunnery Sergeant working for NAVAIR PEO(U&W) PMA-242, Direct Strike and Time Sensitive Weapons Co-IPT Lead for Aircraft Gun Systems, Airborne Direct Munitions, and medium caliber ammunition. Dan was also the lead for the US Marine/US Navy adoption of the GAU-21 Common Defensive Weapon System (CDWS) as the direct primary replacement for the services aging .50 caliber crew served weapon. During his fleet tour as a CH-53A/D/E helicopter aircrewman, mechanic he flew combat missions in Kuwait, Iraq, Horn of Africa and Somalia. Over his 22-year career he attained over 5,000 hours in the Sikorsky CH-53 series helicopter, and deploying with the 11th, 13th, and 15th Marine Expeditionary Units.

Dan participates as a facilitator and peer/mentor for operational stress programs for veterans across Calvert and St Mary’s counties.

"Gunny (goes back to Naval Air Station Pax River 2006) has been the hidden backbone of our program for some time now. Simply couldn't pull off The ADVANCE Training Op without him as a volunteer."
- Doc V, Executive Director